Waguri (Japanese chestnut) has been loved by Japanese people for over 10,000 years since the Jomon period. We succeeded in commercializing the world’s first plant-derived human-type ceramide from chestnut skin, a by-product of this processing. Plant human ceramide is characterized by an ultra long-chain structure, and has a high epidermal barrier function improving effect and moisturizing effect.

“Plant (or botanical) human ceramide” is the world’s first ceramide that is derived from plants (chestnut skin) and has a human-type structure (ceramide AP).

・Origin: Skin of Japanese chestnut, Waguri. We have found that chestnuts produce plant human ceramide during the formation of the rind. In order to prevent the seeds (chestnuts) from drying out, it is thought that ceramide is accumulated and moisturized in the same way as the human stratum corneum.
・Human-type ceramide: means the same structure as epidermal ceramides
・Ceramide AP: A human-type ceramide that combines alpha-hydroxy fatty acid and phytosphingosine, and combines the initials A and P.
・Ultra long-chain: The main ceramide component of human skin is ultra long-chain ceramide with a fatty acid chain length of 24 carbon atoms. Plant human ceramides are mainly ultra long-chain ceramides such as C24 and C26. Ultra long-chain ceramide improves the barrier function by building a stable lamellar layer as an intercellular lipid in the stratum corneum. The fatty acid chain length of synthetic ceramide is as short as C18.

Ceramide is one of the intercellular lipids in the skin and is one of the most important ingredients in moisture retention and barrier function. Ceramide is one of a group of substances called sphingolipids, in which sphingosine (primary amino alcohol) and fatty acid are bonded with an acid-amide. In human skin, more than 300 types of ceramide molecules have been confirmed in detail, and the ceramide ingredient with the same structure is called “human-type ceramide”.
Ceramide is a component that has attracted much attention as an ingredient for cosmetics, but most ceramides used in cosmetics are chemically synthesized products. The name of ceramide is classified according to the difference in structure, and the current cosmetic nomenclature is classified as shown below.
Non-synthetic human-type ceramide is only derived from microorganisms*, and there has never been a plant-derived human-type ceramide. 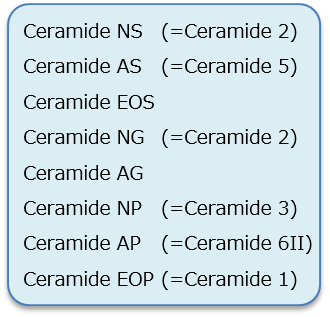 3. About plant and animal ceramides

Plant-derived ceramide ingredients are put into practical use from many plants such as konjac and rice. These are all components called glucosylceramide (cerebroside), and the structure is very different from ceramide in human skin. They are mainly used as food ingredients. Animal-derived ceramides include those derived from the horse spinal cord and milk, but these are also known to be significantly different in structure from human skin ceramides. Briefly, horse-derived is cerebroside and milk-derived is sphingomyelin. In other words, all natural ceramides so far are non-human types, regardless of plant or animal origin.
Human-type ceramide takes a free form with no sugar or phosphate bound. Since it is not contained in normal living cells, it is a component that does not exist almost in nature. Human skin, on the other hand, has the ability to constantly produce human ceramides over a long period of evolution to combat dry stress on the ground. 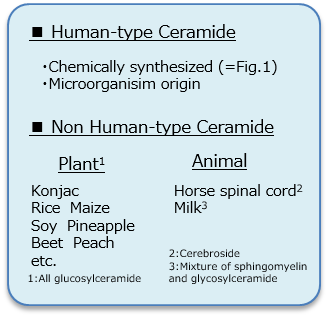 Lamella structure of ceramide in the stratum corneum 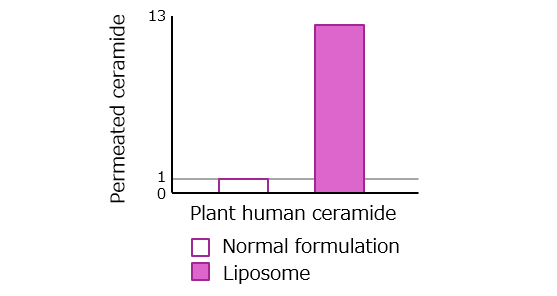 ＜Gene characteristics＞
HAS1 (Hyaluronan synthase-1):
An enzyme responsible for the synthesis of hyaluronan in the dermis. It is expressed in dermal fibroblasts and produces high molecular weight hyaluronan. HAS1 produces higher molecular weight hyaluronan than HAS2. Hyaluronan is involved in the retention of moisture in the skin and gives it firmness and prevents wrinkles.
FLG (Filaggrin):
A protein that is the source of natural moisturizing factor (NMF), a moisturizing component of humans. It breaks down with the metabolism of the skin to become amino acids and retains moisture of the stratum corneum as NMF. If it decreases, the barrier function and moisture retention ability of the skin will decrease and cause dryness.
TGM1 (Transglutaminase):
An enzyme that promotes the formation and maturation of the cornified envelope (CE) related to the barrier function of the skin. Increases activity in humid environments and produces mature CE. CE maturation leads to the maintenance and improvement of skin barrier function and moisture retention.
GBA1 (β-Glucocerebrosidase):
An enzyme that produces ceramide (ceramide EOP etc.) from glucosylceramide, a precursor of ceramide. It is produced by epidermal cells and has a barrier function to protect against external stimuli. If ceramide is decreased due to aging etc., it may cause dryness.

＜Results and discussion＞
plant human ceramide promoted the expression of hyaluronan synthase gene (HAS1) in fibroblasts. As a result, dermal hyaluronan is increased, moisture in the dermis is retained, and it can be expected to give the skin firmness and suppress wrinkle formation.
In addition, plant human ceramide promoted the expression of the following genes: filaggrin gene related to NMF production in human epidermal keratinocytes, TGM gene related to barrier function enhancement by binding of stratum corneum protein in 3D skin model cell, and GBA gene related to moisturizing and barrier function enhancement by ceramide production. Moreover, the filaggrin gene showed a stronger expression promoting effect than synthetic human ceramide.

In plant ceramide metabolism, there are two main systems: a system that produces a glucosylceramide having a plant-specific structure, and a system that produces a high-molecular phosphate-binding ceramide having a human-type ceramide skeleton. Although the former glucosylceramide has a structure that is significantly different from that of skin ceramide, it has been put into practical use by many plants and is also used in Foods with Function Claims as so-called “plant ceramide”. On the other hand, we discovered that the latter phosphate-binding ceramide was converted to human-type ceramide by breaking the phosphate bond under the natural life phenomenon of programmed cell death, and it was accumulated in chestnut skin. It is suggested that ceramide production, which occurs constantly in human skin metabolism, also occurs in plant skin formation.

Back to Original Ingredients

In principle, the copyright of this document belongs to Saticine Medical Co., Ltd., except where the source is clearly stated. Copying, duplicating, quoting, reprinting, translating, or lending all or part of this document without permission is prohibited, regardless of purpose or method. This document is an ingredient technical document, and the expression introduced in this document does not guarantee that it does not violate various laws.