“Lipo” is a lipid. “Phenol” is a polyphenol.
In other words, “Lipophenol” is an oil-soluble polyphenol obtained from plants, and it is a rare component that can only be obtained from dozens of sweet potatoes to 1 gram.
Lipophenol is an expected natural ingredient that combines various functions* and high skin permeability. Lipophenol will solve many skin problems*

The cell membrane of about 37 trillion cells that make up the human body1) is made up of lipids. Therefore, oil-soluble Lipophenol is excellent for percutaneous absorption and penetrates cells to exert high physiological functions.

The sweet potatoes cork the tuberous peripheries to protect it from drying to keep offspring. At this time, a new caffeic acid alkyl ester with increased oil solubility by combining cetanol with polyphenol is created in the tuberous root to prevent moisture transpiration of sweet potatoes. Cork layers are also known to protect tissues from ultraviolet radiation.

* Caffeic acid: Has long experience of eating because it is contained a lot in coffee.
It is known that it has a strong antioxidative property because it has a catechol structure.

Caffeic acid, which constitutes plant Lipophenol, is known to cause antagonistic inhibition because it is similar in structure to tyrosine and easily binds to the hydrophobic active site of tyrosinase. In addition, plant Lipophenol has excellent transdermal absorbability.
In other words, high whitening effect can be expected.
Lipophenol, created by sweet potatoes to protect themselves, is an effective ingredient for humans. 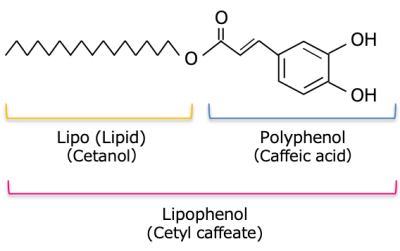 Sweet potatoe was ranked in the top 3 of Beauty Superfood Rankings in the second half of 2018 (Japan Superfood Association)*1. Sweet potato tubers that are eaten deliciously as healthy vegetables on a daily basis, but for the plants themselves, are important tissues for breeding. Therefore, a special defense mechanism is provided to combat various stresses in the ground such as pathogenic bacteria. One of them is the ability to form suberin (cork layer), which has a function similar to that of human stratum corneum. In other words, it functions as a barrier that prevents moisture and bacteria from entering from the outside and prevents the moisture loss from the inside.
We discovered for the first time in the world that “Lipophenol” accumulated in the cork layer of this sweet potato tuber.
However, since the cork layer is an extremely thin layer, mass production of Lipophenol has been difficult. Therefore, by maximizing the ability of sweet potatoes through ”Priming treatment”*2, a cork layer is formed throughout the whole tuber. We succeeded in putting Lipophenol into practical use 2).

*1: Limited to materials that can be used as cosmetics, having the three major elements required for skincare, such as whitening, aging care, and moisturizing.
*2: Priming: When a plant receives stimuli (primers) such as pests and drying / humidification, it exhibits various resistances. Phenomenon that once stimulated with such a stimulus, the defense response is stronger than before when the same stimulus is received next time

Sweet potato which is also a beauty superfood. The pericarp mainly contains water-soluble polyphenols such as anthocyanins and chlorogenic acid, but the pulp part contains almost no antioxidants. By corking the whole sweet potato by the priming process, the antioxidant properties have been greatly improved not only in the pericarp but also in the pulp. Along with that, it was found that Lipophenols increased significantly in the potato tuber. Lipophenol was extracted from this sweet potato and made into a cosmetic ingredient. 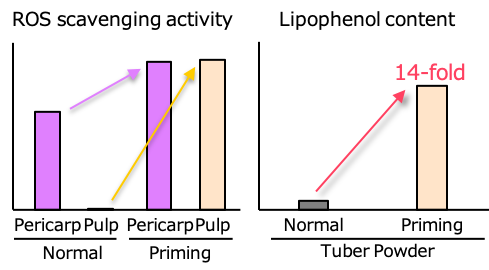 B16 melanoma cells are cultured for 24 hours. Then add αMSH (melanocyte-stimulating hormone) and Lipophenol-containing DMEM and incubate for 72 hours (use DMSO for negative control and β-arbutin for comparison)
1) After culturing, cell number is measured. Image of solubilized melanin is taken
2) Measure cell viability after culturing. After adding L-DOPA and reacting at 37 ℃ for 60 minutes, measure tyrosinase activity

In αMSH-stimulated B16 cells, Lipophenol suppressed melanin production in a dose-dependent manner. It also suppressed the activity of tyrosinase, an important enzyme for melanin synthesis, and was shown to be more active than arbutin at the same active ingredient concentration.

B16 melanoma cells are cultured for 24 hours. Thereafter, αMSH and Lipophenol-containing DMEM were added and cultured for 48 hours (DMSO as a negative control, β-Arbutin as a comparative sample). RNA extraction and cDNA synthesis. RT-qPCR using cDNA

In αMSH-stimulated B16 cells, Lipophenol suppressed the expression of the tyrosinase gene and the transcription factor MITF gene, which were shown to be more active than Arbutin at the same active ingredient concentration. Tyrosinase is the rate-limiting enzyme for melanin synthesis, Mitf is a pigment cell-specific transcription factor and the master regulator of melanocyte development. Also suppressed Pmel17, which is involved in melanin pigmentation

SCF (Stem cell factor) :
A factor that is produced from epidermal cells by stimuli such as UV rays and activates melanocytes. SCF-stimulated pigment cells synthesize melanin. Excessive production of melanin can cause spots.
IL1A (Interleukin-1α) :
An inflammatory cytokine produced from epidermal cells. The produced IL-1α stimulates pigment cells and promotes melanin production. It increases due to the influence of ultraviolet rays, etc., causing spots formation.
COX2 (Cyclooxygenase-2):
An enzyme used to make prostaglandin E2 (PGE2), an inflammatory cytokine. Under the influence of ultraviolet rays, COX2 increases in epidermal cells and PGE2 is produced excessively. This PGE2 stimulates pigment cells and promotes melanin production.
PAR-2 ​​(Protease-activated receptor-2):
A protein involved in the transfer of melanin from melanocytes to epidermal cells, causing melanin to accumulate in epidermal cells. It increases due to UV rays and inflammation, and if the epidermal cells carry melanin excessively, it can cause spots. Back to Original Ingredients

In principle, the copyright of this document belongs to Saticine Medical Co., Ltd., except where the source is clearly stated. Copying, duplicating, quoting, reprinting, translating, or lending all or part of this document without permission is prohibited, regardless of purpose or method. This document is an ingredient technical document, and the expression introduced in this document does not guarantee that it does not violate various laws.